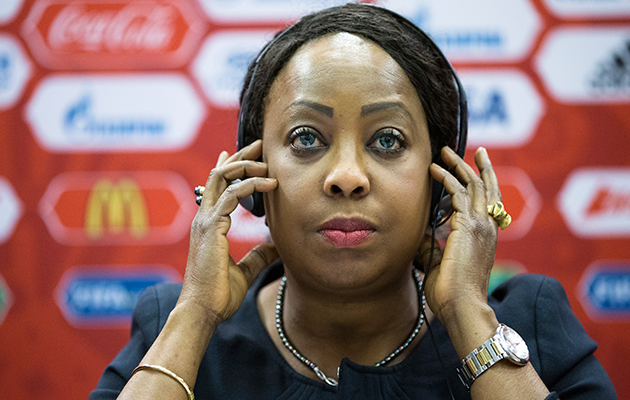 Ranked by Forbes as the most powerful woman in international sports in 2018, Fatma Samoura is a Senegalese who currently serves as the Secretary-General for the FIFA, the international highest governing authority in football.  She became the first woman to occupy the position, having been appointed in 2016 by Gianni Infantino, the President of the governing body. She had served at the United Nations, holding different senior portfolios, notably as the Deputy Humanitarian Coordinator (DHC) for eastern Chad in 2007, where she managed her teams to provide adequate supports for the victims of conflicts in the region.

Samoura’s diplomatic acumen was first brought to fore in 1995 when she joined the United Nations World Food Programme (WFP) as the Country Director in Djibouti and Cameroon, and later transferred to the organization’s headquarters in Rome, Italy. In this role, she had stellar achievements, developing formidable mechanisms in the management of emergencies in crises infested areas such as Sierra-Leone, Liberia, Kosovo, Nicaragua and East Timor.

The remarkable impacts she made won her recognition from the former UN Secretary-General Ban Ki-Moon, who based on the recommendation of John Holmes, the Under-Secretary-General for Humanitarian Affairs, appointed her as the Deputy Humanitarian Coordinator for Eastern Chad in 2007. Based in Abéché, a Chadian town that borders the conflict-ridden Darfur, Samoura was proactive in her job providing guidance to about seven United Nations agencies and 40 non-governmental organizations (NGOs) with an international outlook. Through her coordination, some of the 180,000 displaced Chadians were sheltered and had their hopes restored for new lives. This was the last position she served before her recent appointment to the management of FIFA.

In 2018, she was listed by BBC as one of the ‘100 most influential and inspirational women in the 21st Century.  For her elegant contributions towards humanitarian assistance in Africa and the international level and her leadership attributes in the world of men, Fatma Samoura is our woman of the week.